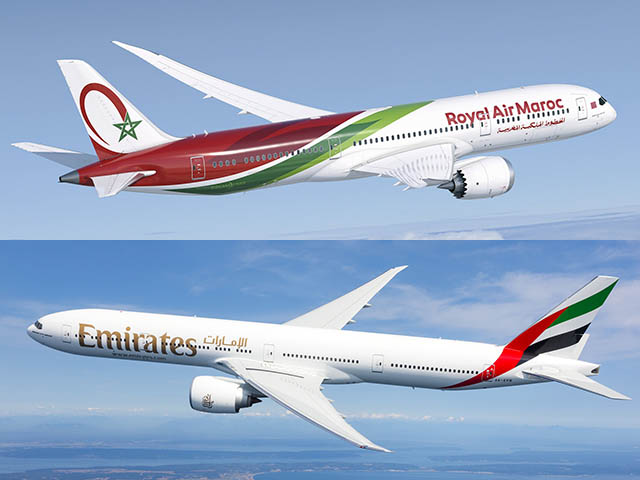 Royal Air Maroc and Emirates have entered into a codeshare agreement allowing them to strengthen air links between Morocco and the United Arab Emirates.

This partnership signed on May 10, 2022 allows the two air operators to share their codes on a set of two hundred and nine destinations. Their passengers will thus have more choices and possibilities of travel towards the various destinations of the worlds borrowing their flights connecting Dubai to Casablanca and other connections.

In addition, the cooperation between the two airlines will have a positive impact on the prices of air tickets offered by RAM and its partner Emirates. Both operators are now selling their codeshare operated flights on their websites.

Passengers wishing to fly with Emirates take flights served under the EK code to fly to Casablanca-Mohammed V and seventeen other destinations in the kingdom as well as sixty three cities spread over several countries, while Royal Air Maroc passengers will have access to a network with hundreds of destinations of international destinations, sold under the code AT.

This partnership was announced by Emirates as it has just celebrated its 20th anniversary on its Dubai-Casablanca route on which nearly three million and five hundred thousand passengers have traveled.